Almost from its beginnings St Gabriels Swansea has followed the Catholic (or ‘high church’) tradition within Anglicanism. Whilst there is definitely evidence of this in the early years of the parish, it is especially to Fr M. H. Ll. Williams, the third Vicar (1911-1949), that this is due. He made every effort to beautify the church and to ensure that the Mass was at the heart of its worship. The church today continues to follow this tradition, although naturally the style of worship has changed to reflect changing liturgical perceptions.

In the 1880s Swansea was growing rapidly. Middle-class suburbs were spreading west. St Helen’s Avenue and King Edward’s Road had been built and houses were starting to climb up Rhyddings Park Road and Finsbury Terrace. To meet the needs of this new and expanding community a prefabricated church (or ‘tin tabernacle’) was erected at the top of what is now Rhyddings Park Road in 1886. This was only intended as a temporary expedient and negotiations were soon under way for the erection of a permanent church.

The owner of most of the land on which present-day St Helen’s and Brynmill are built was Colonel William Llewelyn Morgan. 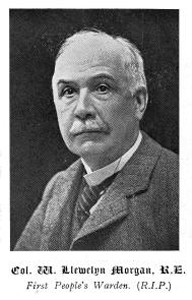 He announced that he was ready to give a site for a church and £2,000 cash towards its construction and so work on what was to become St Gabriel’s started in 1888. There was one condition attached to Morgan’s generosity: the new church should be dedicated to St Gabriel, because that was the dedication of the church in Ethiopia in which his eldest brother, Jeffrey, was buried. Jeffrey Morgan, also an army officer, died while on active service in that country in 1867.  Colonel Morgan remained a devoted member and a most generous benefactor of the church until his death in 1927.

The architect of St Gabriel’s was Thomas Nicholson of Hereford (1823-1895). He had previously built or restored a good number of churches in the Hereford diocese, but his only previous commission in Swansea had been St James, Walter Road. He was a diligent but rather unimaginative Gothic revivalist. As a restorer he was too heavy-handed and was said to have left ‘a trail of destruction’ in his home diocese. St Gabriel’s is probably one of his better churches.

The new church was consecrated by the Bishop of Saint David’s on 18 July 1889 (until the creation of the diocese of Swansea & Brecon in 1923 Swansea was in this diocese). In a low church town such as Swansea was in the nineteenth century, there must have been every expectation that it too would adopt this tradition. However, in those days the parish was home to many of Swansea’s professional and middle classes, the sort of people who were often attracted by the teachings of the Oxford Movement and the Catholic revival within the Church of England, and it soon became clear that this was the direction in which many of them hoped that St Gabriel’s would go. Hitherto the only churches in the town that had in any way been influenced by these developments were Christ Church and St Paul’s, Sketty.

The second vicar, John Pollock, was not unsympathetic. He was a fine and well loved priest who killed himself with over-work, but he could never have been described as more than a very moderate Catholic. Nevertheless, the Catholic tendency within the parish was in the ascendant. Hymns Ancient & Modern was adopted (regarded by some at the time as dangerously high church); devotions such as the Three Hours on Good Friday and daily services during Holy Week were introduced; that touchstone of evangelical devotion and anathema of the Catholics, evening communion, was abandoned; support for the U.M.C.A., a missionary society of the Catholic wing of Church of England, was encouraged, and a whole range of other changes, modest but all of a Catholic flavour, were introduced. The arrival of John Simon (father of Glyn Simon, later Bishop of Swansea & Brecon, Bishop of Llandaff, and Archbishop of Wales) as assistant curate in 1895 provided further strength to the Catholic cause within the parish: he was clearly more ‘advanced’ than his Vicar. By 1906 St Gabriel’s was a well attended church although it could only be described as very moderately Catholic by later standards. Two fascinating documents of 1906 and 1915 by a local church-crawler describe the arrangements that were then in force. 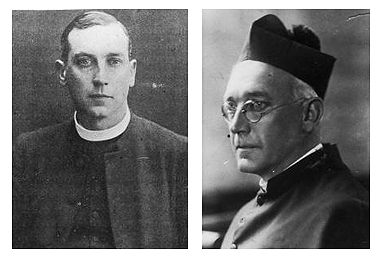 During Fr Pollock’s incumbency the first church hall on St Helen’s Avenue was built. It was opened in 1897, but became a financial millstone around the neck of subsequent vicars and it was with great relief that it was replaced with a new church hall in 1962 (which in turn became too expensive to maintain and has been sold). The old hall still stands, but it is used for secular purposes. Also, in order to meet the requirements of the rapidly expanding district of Brynmill, a new mission church dedicated to St Augustine (of Canterbury) was built and opened in 1905. Fr Simon was given more or less sole charge and the daughter church soon adopted a style that was considerably more Catholic than that of the parish church. St Augustine’s remained a daughter church of St Gabriel’s until falling attendance and the prospect of heavy financial costs forced its closure in 1994. It was situated at the junction of Park Place and Oakwood Road on the site now occupied by Ty Rhiannon.

John Pollock diedin 1911 and he was succeeded by Maurice Henry Llewellyn Williams then working in London but born in Cardiganshire. He soon showed that he intended to follow a line that was unquestionably Catholic, both in the style of worship and in the ambience of the church. In 1914 Choral Eucharist was introduced on Sunday in addition to Matins and every effort was made to develop it into the main service of the day; altar lights, vestments and a daily celebration soon followed. Distinctively Catholic practices such as reservation of the Blessed Sacrament, Stations of the Cross, sacramental confession, the liturgical use of incense, and the observance of feasts such as Corpus Christi and All Souls all made their appearance. During his first twenty years Fr Williams adopted an unremitting policy of beautifying the church and equipping it for the fullness of Catholic worship. But already by 1920 he could claim that ‘S. Gabriel’s stands for definite Catholic teaching and practice’. 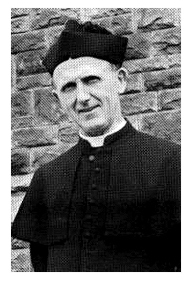 Fr Williams (by then Chancellor Williams) resigned in 1949. He was succeeded by Fr Illtyd Jenkins, who maintained the tradition of the parish, albeit in a changing environment. The social changes already visible in the 1920s and 1930s were accelerated in the years of ‘never had it so good’. Curates were harder to come by and time-honoured devotional and liturgical practices were being questioned and modified, or even abolished, in the changing understanding of the faith that affected all parts of the western church. Fr Jenkins organised three parish missions and was responsible for finally disencumbering the parish of the old church hall. Its replacement, much more convenient and modern, built on the site of the stables where Fr Williams kept the horse that he used to ride on Swansea beach, was dedicated in 1962. This in turn was sold in 2006 in the face of ever-increasing maintenance costs. In order to provide an area for meetings and social events, the western bay of the nave was screened off in 2011 and an extension was built to house a kitchen and lavatories. 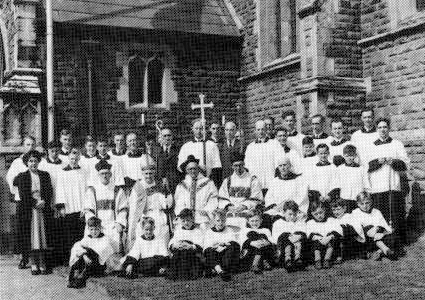 Clergy, servers and choir at the 60th anniversary celebrations, 1949

Fr Jenkins was replaced by Fr Eric Wastell. Under his incumbency the centenary of the parish was celebrated with great enthusiasm in 1989. On his retirement in 1998 he was succeeded by Fr Mark Griffiths. Both have uncompromisingly maintained St Gabriel’s as a centre of Catholic worship and devotion within the Church in Wales while ensuring that it remains fully in line with the rest of the western church and does not become a period cameo.

Attendances may not be what they once were, but it is worth noting that our average number of Sunday communicants today is not so very different from an average Sunday in 1910 or 1920 or 1940 – although that doesn’t allow for the non-communicating attendances of those days. 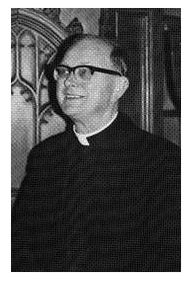 However, our Easter communions are unlikely to rival those of Fr Williams’ day: in 1912, probably the best year, he had 597 in St Gabriel’s and 185 in St Augustine’s. Nor are we likely to be in the position of having a Sunday school of over 800 children, as was the case for Fr Pollock in 1900.

Sunday 4 April (Easter)
9.30 am  Mass with blessing of Easter garden

If you wish to be present at any of these, please notify Keith Rogers in advance.  Because of the need for social distancing numbers must be limited.