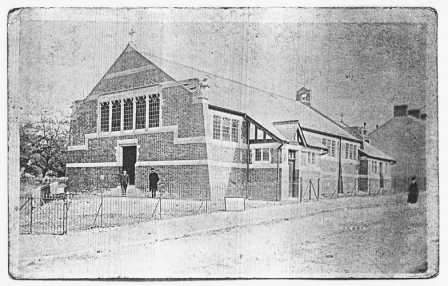 St Augustine’s church in about 1905

Until 1994 St Gabriel’s had a chapel of ease dedicated to St Augustine. Sadly, the cost of maintenance forced its closure in 1994. It was at the corner of Oakwood Road and Park Place on the site now occupied by Ty Rhiannon.

By the end of the nineteenth century the Brynmill estate, the property of Colonel Llewellyn Morgan, had largely been built up. Its boundaries were marked by Brynmill Lane, Park Place, Brynmill Avenue, St Alban’s Road, Finsbury Terrace and the Recreation Ground. On the adjacent Rhyddings Estate housing development had been a little slower, but by 1900 Marlborough Road, Rhyddings Park Road and the lower part of Bernard Street had all been started, and Alexandra Road, Aylesbury Road and St Alban’s Road had been marked out. The entire area fell within the recently created parish of St Gabriel’s.

The population of the parish was put at over 6,000 in 1895 and it was expected to reach 9,000 by 1901. Clearly St Gabriel’s church alone would not be adequate if the Church was to make any impression on this growing population. By 1896 the Vicar, John Pollock, had decided that the parish would have to think about more building, both for worship and for social events.

Now it happened that the parish already had a mission hall on St Helen’s Avenue. This building had started off as a Baptist chapel but in 1887 Colonel Morgan had bought it and given it to the Church. It was decided that the best way to provide the extra accommodation so urgently required would be to put a large, purpose-built hall on the Avenue site and to remove the mission building to a new location where it would meet the needs of the inhabitants of the new streets on the Brynmill and Rhyddings estates.

Work on the new hall started in 1897 and shortly afterwards the old mission hall was dismantled and transferred to its new site on Alexandra Road, where the first houses had just been built. It occupied the place where numbers 11 and 15 now stand. A contemporary photograph shows it to have been an archetypal ‘tin tabernacle’, its timber frame fronted with corrugated iron and with a little bell turret at one end. It was perhaps at this stage that the building acquired its nickname of ‘the runaway chapel’.

The re-located mission hall was dedicated to St Augustine, the first Archbishop of Canterbury, probably as a declaration of loyalty at a time when disestablishment of the Church in Wales was being widely urged. It was opened on 10 March 1898 with services at 8 a.m., 3 p.m. and 7.30 p.m., but the parish magazine noted that ‘the attendances were not large’, which is not surprising since that day was a Thursday.

Since 1895 John Pollock had been assisted by a curate, John Simon (father of Glyn Simon, later to be Archbishop of Wales). Simon had come under the influence of the Anglo-Catholic movement, more so than Pollock, and from the outset he started to introduce definite Catholic practices in St Augustine’s, where the Vicar gave him a free hand as curate-in-charge.

By 1903 Fr Simon had built up the congregation to the point where ‘the runaway chapel’ was no longer adequate. It was decided to rebuild St Augustine’s on a new site in Park Place on land presented by Colonel Morgan. C. Russell Peacock, a local architect, was commissioned to produce designs and the parish set about raising the £2,500 which the project was expected to cost. Work started in June 1904, the contractors being the firm of Bennett Bros. who are still in business today. The memorial stone was laid on 1 September 1904 by Mrs Walters, the wife of the High Sheriff of Glamorgan and a member of the parish.

The new St Augustine’s was dedicated by the Bishop of Swansea on 28 April 1905. The rain was pouring down, so the planned procession from the old church did not take place. Fortunately members of the congregation had moved what furniture was needed on the previous Monday (Easter Monday).

The old ‘runaway chapel’ was retained for a few years. In 1906 it re-opened as a club for ‘young fellows’ of the two churches, but it was not a success and the club closed in January 1908. The building was then sold to the Vicar of Llansamlet who moved it – once again – to Bonymaen where it remained until the present St Margaret’s church was opened in the 1930s.

The senior curate at St Gabriel’s was traditionally given charge of St Augustine’s in the days when the parish enjoyed the luxury of two curates. John Simon remained until 1910 and a fascinating description exists of the church and its worship as it was in his days and the days of his immediate successors.

Later curates who made a particular impact were Fr Cyril O’Ferrall (whose brother was Bishop of Madagascar) and the well loved Fr Leslie Norman who was in charge throughout the years of World War II.

Wednesday 4 May.  SS Philip and James, apostles (transferred)
10am Mass

Saturday 7 May
9am Mass
11am-1pm Uplands United for Ukraine : Cake and coffee morning at St Gabriel’s.

Sunday 8 May.  Fourth Sunday of Easter
9.30am Solemn Mass

Wednesday 11 May
10am Mass-for vocations to the priesthood.

Sunday 15.May.  Fifth Sunday of Easter
9.30am Solemn Mass

Saturday 21 May
9am Mass

Sunday 22 May.  Sixth Sunday of Easter
9.30am Solemn Mass

Thurs 26 May.  The Ascension of Our Lord
7pm Solemn Mass

Saturday 28 May
9am Mass

Sunday 29 May.  Seventh Sunday of Easter
9.30am Solemn Mass